Closed cooling systems can be a misnomer for some contained water applications but in general refer to systems which have little or no water loss. The cooling water transfers its heat to another process stream via an exchanger, as opposed to the atmosphere in open recirculating systems. Since there is no cooling tower, evaporation and blow-down are eliminated, leaving the only water loss to be due to leakage. If leakage is well controlled, water losses approach zero and good quality water (softened or demineralized) can then be used cost effectively. This also allows the use of high inhibitor dosage to maintain corrosion and deposit control.

Realistically, however, closed systems operate under a large variety of conditions. On one end of the spectrum, there are chilled water and air conditions loops which service the commercial sector and which operate at relatively low temperature and heat fluxes. Bulk temperatures of between 40 and 60° F are common. Leakage can be quite minimal in new systems yet quite severe in some servicing older facilities. Transfer piping related to the latter case is sometimes networked underground, making proper repairs difficult if not impossible. These loops also require the addition of glycol to prevent freezing during winter months, so any treatment approach must be compatible with this organic component. 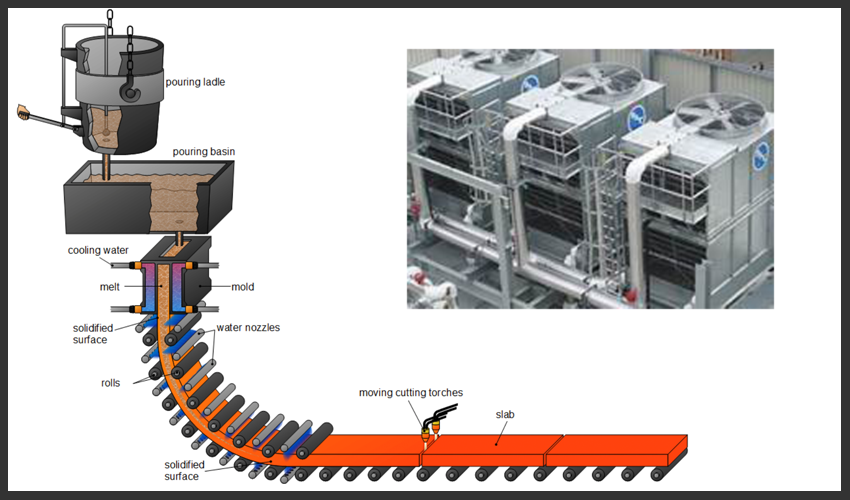 Industrial closed water applications operate under more severe conditions. Such systems include those used during steel casting operation where copper molds containing molten steel are externally quench using the cooling stream. The cooling stream is applied to maintain mold integrity and minimize chances of mold rupture, i.e., breakout. Bulk water temperatures of 110-120° F are common in these systems as well as heat transfer rates across the mold being in excess of 300,000 BTU/ft2 hr. Any amount of mold deposition is unacceptable since breakouts carry significant safety ramifications. The predominant metallurgy in most closed loops is carbon steel and copper, although aluminum, cast iron, and admiralty brass may also be present to a lesser extent. Industrial closed loops also vary greatly with regard to their degree of leakage (with new systems typically being “tighter” than old). Related problems with mistreated systems include loop leakage (due to excessive corrosion), loop pluggage (due to accumulation of corrosion by-products), and subsequent minimization of heat transfer which increases overall electrical costs.

Corrosion and deposit control of these streams have typically been maintained using various treatment combinations These include molybdate and nitrite for carbon steel corrosion, nitrite/nitrate combinations for aluminum control, azoles for copper and admiralty brass control, and polymeric dispersants to minimize suspended solids deposition in low flow areas. Corrosion rates of less than 0.2 mpy for carbon steel and less than 0.1 mpy for copper/admiralty are desired for chilled water systems and less than 1 mpy and 0.2 mpy, respectively, for more severe, industrial applications. Higher rates increase the chance of corrosion by-product accumulation and hence heat transfer deposition. Biocides can also be utilized in these loops to ensure microbiological control and may be necessary using nitrite-based corrosion control programs since it is quite susceptible to oxidation by certain bacteria. Of course, non-oxidizing biocides are also recommended for nitrite containing streams.

While these are the main treatment approaches for closed loops, there are others being utilized also, combining these with other select chemistries.

Corrosion in these applications follow the classical corrosion cell model. The cell is set up when a potential exists between two metals or two different sites on the same metal. This promotes current flow in the presence of an electrolyte. Corrosion occurs at the anode as the electrons are lost, i.e., the metal is oxidized. Electrons flow through the metal and exit at the cathode. The anodic and cathodic reactions follow:

Minimizing either the anodic or cathodic electrochemical reaction will alleviate major corrosion concerns. Theoretically, closed systems should be easier to treat from a corrosion perspective since the water is not continuously saturated with oxygen, thus minimizing the oxygen reduction reaction. However, oxygen laden water is still used as make-up. Even if a system is considered “tight” with minimal make-up, the oxygen concentration in the loop tends to be oscillatory, i.e. low prior to make-up and elevated just after make-up. The chosen treatment must be designed to treat the latter, more corrosive condition. In addition, many systems are not tight and carry consistently high oxygen levels. This requires effective corrosion control. Examples of three treatment approaches for corrosion control in these systems follow:

The molybdate and nitrite components of these programs are well known anodic corrosion inhibitors. They promote formation of a protective and tenacious film on carbon steel making the surface corrosion resistance. While they each are effective alone at high treatment dosages (molybdate requiring the presence of oxygen), molybdate and nitrite also work synergistically together at relatively low dosages. The azole component ensures copper and admiratly brass control. If these metals are also not adequately protected, the resulting copper ions in the water, due to corrosion, will plate-out on carbon steel causing severe galvanic corrosion (pitting attack). Polymers are utilized mainly for dispersing any suspended solids which may deposit in the systems. Accumulation of solids can cause increased corrosion by setting up differential aeration cells on the metal surface resulting in under-deposit corrosion and pitting.

While these are the main treatment approaches for closed loops, there are others being utilized also, combining these with other select chemistries. DELTA will review your system, evaluate your water source, metallurgies of concern, and operational parameters and design a closed system treatment specifically for your equipment and long-term efficiency goals.

Contact us for a free system review and consultation.